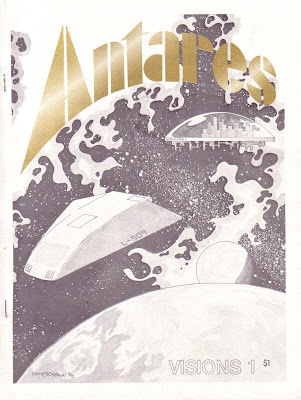 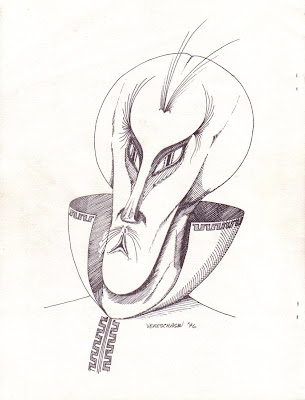 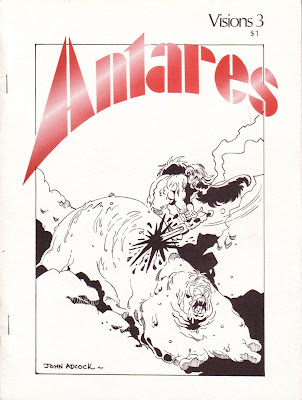 My own contribution was a cover and one interior illustration in Vol. I No. 3, March/April 1977 along with illustrations by John Byrne (spaceship below), David M. Vereschagin, David R. Haugh, Randy Mohr, and Barry Kent MacKay.

Writers were David M. Vereschagin, Eugene W. Plawiuk, Mike Mitchell, Rook Jones, H. A. Hargreaves, and Robert Anton Wilson. A letters column brought forth a comment from fanzine historian Harry Warner, Jr., of Hagerstown, Maryland, author of All Our Yesterdays (1969) and A Wealth of Fable (1976). Also heard from was Arthur C. Clarke.

Wilson Tucker wrote in 1969 of Harry Warner, Jr. that he "is an indefatigable writer of letters of comment, and the young fan editor who publishes two or three issues without receiving such a letter is apt to fold up his presses and steal away in shame." Harry Warner, Jr., a newspaper man, printed and published the first issue of his own long-running fanzine, Horizons, on October 1939. 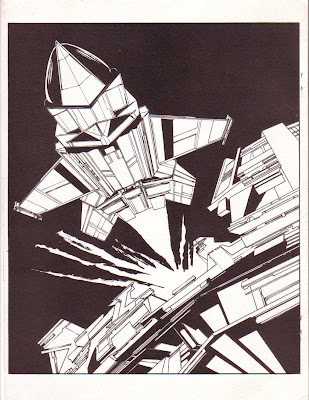 David M. Vereschagin also published First Class no. 1 March 1977 in New Sarepta, Alberta. The Martian illustration immediately below appeared in one of the comic book issues of Visions. 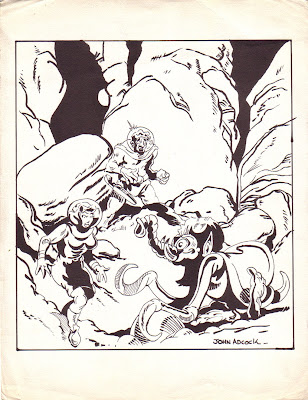 The first fanzine published in Canada was Supermundane Stories, for fans of fantasy and the supernatural, published in the late thirties by Nils Helmer Frome (pen name Herkanos) and featuring work from H. P. Lovecraft, Rider Haggard and Clark Ashton Smith. From the same time period came Croutch Magazine Market News, from Larry Croutch of Parry Sound, Ontario. Title changed to Croutch News, then Light, in 1941.

Rocket (1941) was issued by Fred Hurter with help from Beak Taylor. A fanzine had already appeared with that title and Rocket was changed to Censored. Mephisto, for weird fiction enthusiasts came out in fall of 1942 from Alan Child, and Eight Ball was printed up by Beak Taylor. By 1944 the only fanzine being published was Taylor’s Canadian Fandom published in Aurora, Ontario and survived until the late fifties under different editors.

By the fifties Norman G. Browne was publishing Vanations in Vancouver, B.C. and Georgina Clarke was issuing various fanzines from Calgary, Alberta.

Under the Ozone Hole, Victoria 1992-1996, edited by John Wilson Herbert and Karl Johanson

I’m not boring you am I, Edmonton Editor: Robert Runte, 1983

Contact, Oshawa, Newsletter for the Doctor Who Information Network, No. 1 Sep./Oct. 1980

*Please help yourself to the Comments section with any corrections or additions.
Posted by john adcock at 11:11 AM
Labels: Canadian SF Fanzines