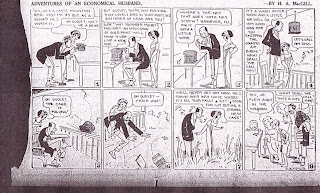 H. A. MacGill was a contemporary of George McManus and Rube Goldberg. His most famous early comic strip was The Hall Room Boys. He drew another strip called Percy & Ferdie which sold 6,000,000 copies in the Cupples & Leon issued comic books. Percy & Ferdie was re-published in one of the earliest comic book or comic book supplements ever to be published, The Funnies, in 1930. The two samples of The Economical Husband are from October 1912. 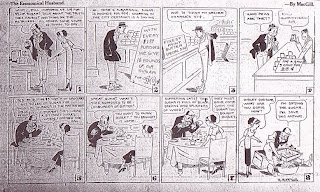 Posted by john adcock at 8:05 PM No comments:
Labels: MacGill H. A.

Jeff Buchanon by Gordon Johnston, artist, and E. Dewar, writer. Syndicated by the Toronto Telegram from 19 May 1960 t0 12 Aug 1961. Parliamentary reporter Jeff Buchanon and his red-headed sidekick Al McNally travelled Canada fighting spies, Indians and terrorists. In an effort to promote the strip across Canada storylines took our hero from Ottawa to Northern Ontario, Labrador, Winnipeg and British Columbia.

I was living in the West Kootenays when this sequence took place and was quite excited to have a comic strip character having adventures in my backyard when the strip was cancelled unexpectedly in the middle of the episode for 8 March 1961 (see bottom strip) leaving readers high and dry. That was a common occurence, the same thing happened with the James Bond comic strip featuring Dr. No.

B.C. was dealing with real terrorism at the time near the Arrow Lakes. Sons of Freedom Doukhobors were planting bombs in provincial post offices, trains, and movie theatres (during the children's matinées). Although the Sons of Freedom are not mentioned in the strip they were the obvious villains of the piece and sabotage of the new Mica Creek dam was believed to be a real possibility. 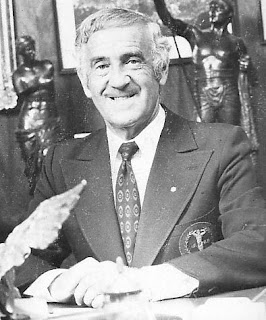 Ben Weider, who helped establish the fitness empire that bears his family's name, died at the Jewish General Hospital in Montreal on Friday at the age of 85. In the fifties the magazine racks were stuffed with the sports, martial arts, and bodybuilding periodicals of the Weider brothers, Ben and Joe, who brought Arnold Schwarzenegger to America. Joe Weider (born 1922) was publishing sixteen titles in the fifties out of New Jersey. Ben Weider resided in Montreal. An obituary, Bodybuilder creates an empire, can be found HERE and a biographical article HERE. 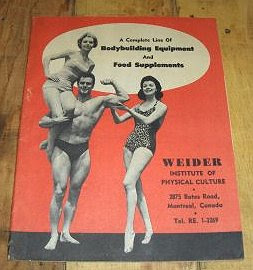