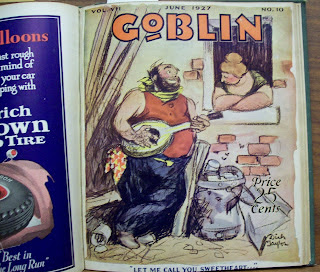 The first issue of Goblin was issued in February 1921 put together by Keith Crombie, Joseph Easton McDougall, James Cowan and Clarke Ashworth. Canadian humorist Stephen Leacock said of literary editor Joe McDougall that he was “one of the most brilliant young writers in Canada today.” McDougall wrote captions for cartoons, articles, jokes and poems as well as drawing cartoons.

Goblin’s newstand sales were the highest of any magazine in Canada. At the heights circulation was 47,000, larger than Maclean’s. Writers included Stephen Leacock, Gregory Clark, Nunnaly Johnson and Bruce Hutchison. Leslie Macfarlane, father of the Hardy Boys, contributed as well.

Richard Taylor’s first contribution appeared in the November 1926 issue and his first cover in the next issue. From here on he was a regular drawing cartoons under several names and several styles. The two most important were Dick Taylor whose work was in brush and Ricardo with a modern jazzy style to his cartoons. Taylor even advertised a Ricardo School of Humorous Illustration at one point.

Goblin apparently ceased publication with v. 9, no. 9 (May 1929)? and was continued by the New Goblin.

In 1935 Richard Taylor had three cartoons rejected by the New Yorker but was finally accepted in time for the New Yorker issue of November 9, 1935 and in time became one of the most successful cartoonists in the world. 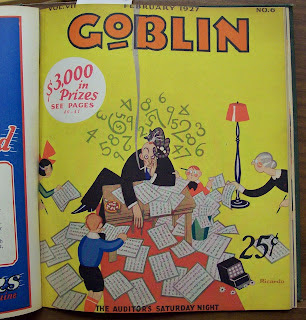 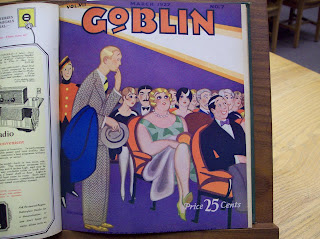 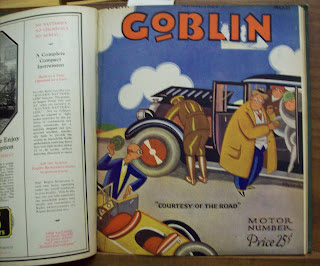 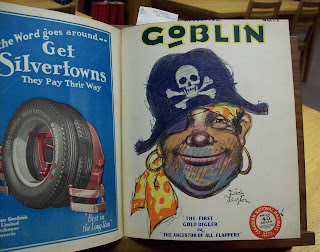 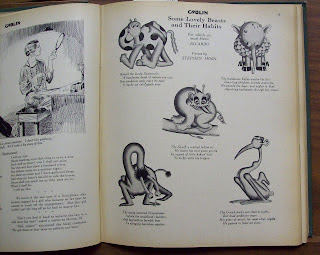 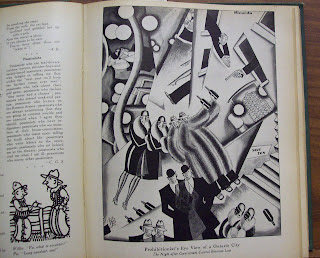 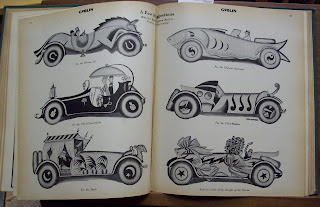 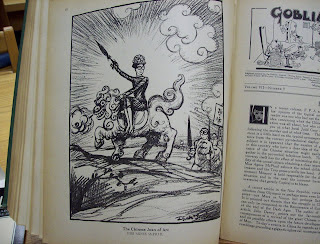 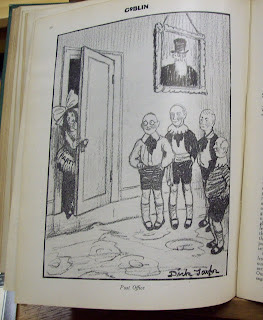 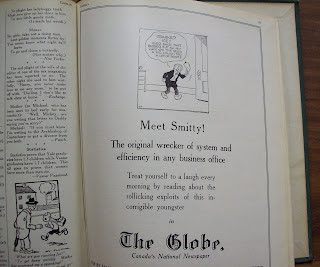 A short history is The Goblin: a brief history of Canada's humour magazine of the 1920s, by John N. Mappin, 32 pages, Montreal : The Author, 1988. Printed for the author by The Porcupine's Quill, Erin, Ontario. “Of this edition, one hundred and eighty-five signed copies have been typeset in Galliard and printed on Zephyr Antique laid. Thirty-five copies are for sale.”
Posted by john adcock at 6:54 PM
Labels: Goblin, Joe McDougall, Richard Taylor

Hello. Thank you so much for this; I found a copy of "If You Know What I Mean" by Joseph Easton McDougall in a church book fair - I loved it mainly for the dedication: "To several nice people of whom I am very fond". Anyway - thank you for letting me find out who he was!

I must of heard this story about Dick Taylor 5 times from my Grandfather, Joe McDougall. An exceptional storyteller, Granpa used to tell the story of how Dick Taylor showed up one day at the Goblin's office on St. George Street in Toronto. At the time, Taylor considered himself a painter -- an artist -- and wanted to produce "serious" drawings for reproduction in the Goblin. Granpa told him that the magazine needed a cartoonist, and if Taylor was willing to collaborate on cartoons (Granpa would write the dialog), he had a job. The rest is history.

This is so cool...JE McDougall was my grandfather (I see my cousin Alex has beat me to this site). I'd often heard tales of the Goblin, but never seen an issue. I feel as if I've followed in R. Taylor's footsteps, wanting to be a 'serious' artist but always having to draw cartoons/illustrations to pay the rent ! Hmmm...

So here it isSeptember 2010, and I just now read your blog. How can I thank you enough for all of this about my father, Joe McDougall and his collaboration with Richard Taylor? The stories my dad told me about their pranks together are legendary. When he died, he left me all the Goblin issues he had - a huge collection, which McGill University wanted for their archives. If you need more, that's where they are.
Again, thank you so much - my father was my best friend all of our lives together.
Linda McDougall, Guanajuato, Mexico

Good to hear from you, Linda. If anyone has further information about Joe McDougall's birth, hometown, date of death, photos please get in touch with me at email on this page and I'll gladly update this post.