Do You Know Why by Fisher 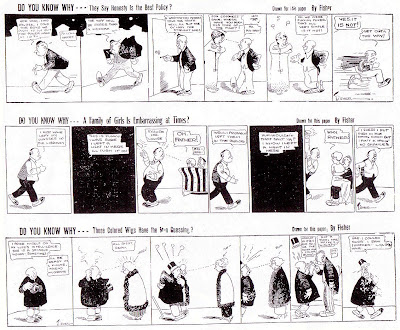 I have been neglecting Punch in Canada lately. "Do You Know Why" appeared in the Ottawa Citizen throughout 1914 "drawn for this paper by Fisher." It was not published daily, more like whenever someone got around to finishing a new batch, then they were often published three to a page like this sample from 5 Dec 1914.

I don't know for sure, and maybe never will, but another Citizen cartoonist may have been Jacques' "If We Said What We Thought But We Don't," which also had a sporadic staggered publication a few years later in 1916. The Ottawa Citizen is the only paper I know of to carry the strip.