Nipper appeared in the London Sunday Pictorial as 'Charlie Boy' and was a favorite with little Prince Charles. Image from The Australian Women's Weekly 19 Nov 1952. Obituary from the Windsor Star, 4 Jan 1983. 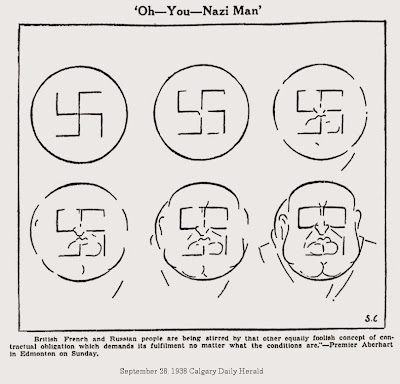 William “Bible Bill” Aberhart was manna from heaven to Canadian cartoonists of the “Bible Belt” in the mid-thirties, in the depths of the drought and depression. Aberhart was a large, corpulent, pasty-faced flim-flam authoritarian with a background as a high school teacher and radio evangelist. He bore more than a passing resemblance to Mussolini and took on an even closer resemblance as the cartoonist Stew Cameron warmed to his task of skewering him in the Calgary Herald. Aberhart believed in the Rapture, the Anti-Christ, the devil, end-time biblical prophecy, the Second-Coming, and the weird economic theories of Major Douglas, British economist and originator of Social Credit.

Under Aberhart, who had never held office, Social Credit swept to power in 1935. He did this by promising a $25 a month dividend for every adult male or female citizen of Alberta, and the day after his victory bums were already dropping off boxcars in Calgary and Edmonton searching for the “dividend” offices, and people with money made a fearful rush on their bank accounts, moving their money out of reach in the East. Aberhart issued Scrip in the form of dollar bills which came to be known as “baloney” bills. By Christmas 1936 ‘Scrip’ was dead in the water and on February 27, 1937 Aberhart admitted his credit plan was a failure.

Stewart Cameron studied art at Mount Royal College and his early cartoons appeared in a variety of Calgary newspapers. He designed a Conservative pamphlet tiled The Amos and Andy of Social Credit then tried his hand in Hollywood, employed by Walt Disney around the time of Snow White and the Seven Dwarfs. Cameron returned to Calgary drawing political cartoons for The United Farmer and the Eastern owned Calgary Herald. Arch Dale, editorial cartoonist for the Winnipeg Free Press (also owned by Southam’s chain), had been skewering Aberhart’s $25 “dividend” for months before Cameron took up the pen. On July 4 1936 Cameron’s first Aberhart cartoon appeared in the Calgary Herald. Cameron’s depiction of Aberhart was based on firsthand sketches made at rallies at Aberhart’s Prophetic Bible Institute. 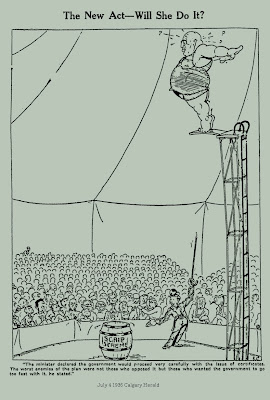 Between the two cartoonists Aberhart knew no peace but Cameron’s cartoons were so effective that it was said Stew Cameron had to leave his office by fire escape and back alley to escape the attentions of angry Social Credit supporters. It may be pure invention. Ted Byfield told the story of some newspaper boys selling J. J. Zubic’s anti-Aberhart The Rebel, who were beaten by a gang of Aberhart’s evangelical female adherents. One unsubstantiated story (in “The Hecklers”) said that Cameron’s house was bombed by SC members. None of his biographers mention this and I could not verify it through newspaper reports.  In response to the cartoons, and attacks in the Herald and The Rebel, Aberhard passed a draconian press gag-law which led to Aberhart’s downfall although Social Credit ran the province until 1947.
On October 2 1937 Social Credit tabled the Accurate News and Information Act which “provides for the muzzling of all Alberta newspapers and for using the same organs as mediums of “Social Credit” propaganda.” By 1938 Aberhart was trying to shut down the RCMP in Alberta and replace them with Social Credit “police”. At a meeting in Melville, Alberta, 6 men were tossed out by “20 or more special ushers” wearing police armbands. The ushers were employed by the Social Credit Association and had no connection to the regular police force. Aberhart’s experiments with Social Credit and his peculiar brand of fascism was watched with horrified interest in Australia, Britain and Australia. The British Press refereed to him as “Little Hitler.” Aberhart died May 24, 1943 at Vancouver.
Cameron’s Aberhart cartoons were collected in booklet form and his family published 4 books of cowboy cartoons, What I saw at the Stampede, Weep for the Cowboy, Let the chaps fall where they may, and Pack horse in the Rockies: dudes, denims & diamond hitches. Cameron died in 1970 and his cartoons are held at the Glenbow Archives in Calgary, Alberta.

Aberhart and the Alberta Insurrection 1935-1940, edited by Ted Byfield, Edmonton: CanWest, 2006. Contains many of the Arch Dale and Stew Cameron cartoons. 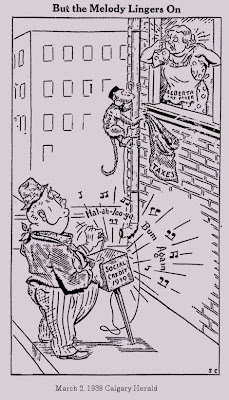 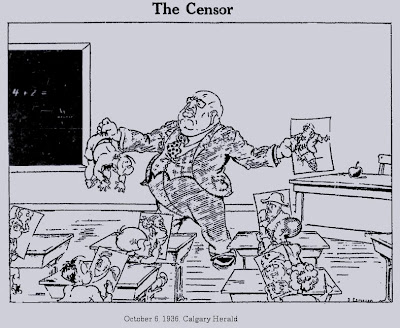 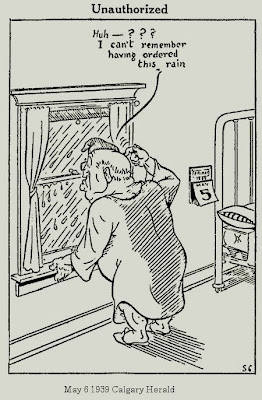 Posted by john adcock at 8:46 AM 2 comments:
Labels: cameron stew 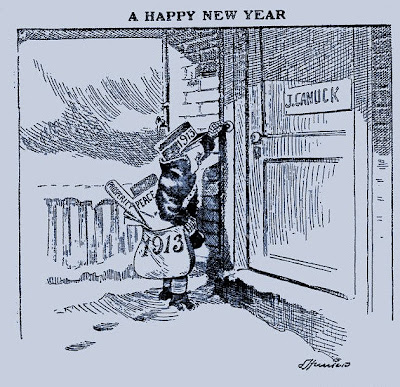 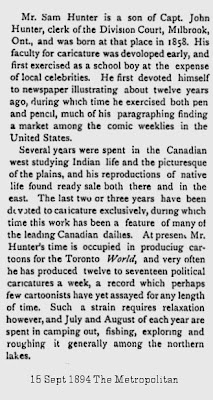 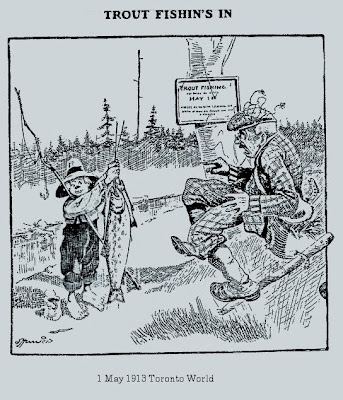 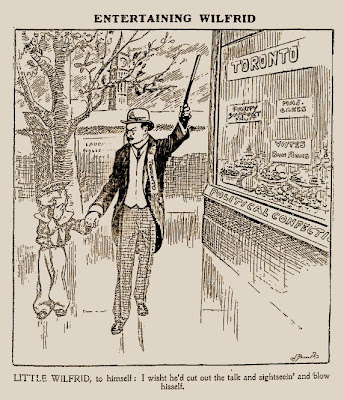